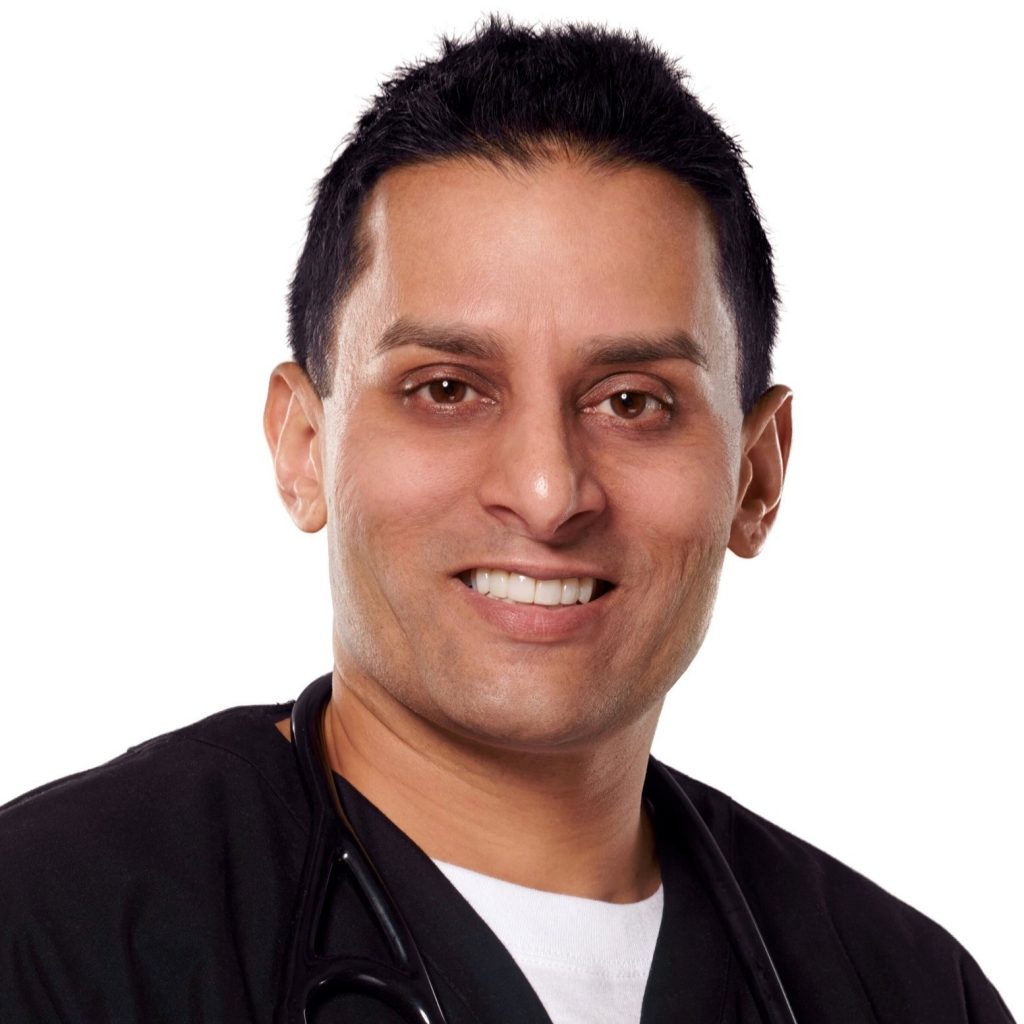 Sudip Bose, M.D. is an emergency medicine physician and professor. He is a graduate of the Honors Program in Medical Education at Northwestern University in Chicago, Illinois and completed his Emergency Medicine Residency Program at Darnall Army Medical Center in Fort Hood, Texas, the highest volume emergency department in the U.S. military. In 2007 Dr. Bose received the National Faculty Teaching Award, the industry’s highest teaching award. In 2012 he was selected by the American College of Emergency Physicians as one of the “Heroes of Emergency Medicine” over the last 40 years for his contributions to the specialty. He has also earned the status of Distinguished Fellow of Teaching by the American College of Emergency Physicians and multiple teaching recognitions as a former associate residency director.

Dr. Bose is an attending emergency physician with a breadth of clinical experience, from the busiest urban emergency rooms in the nation to underserved community hospitals. Currently he practices as a “pit doc” at Medical Center Hospital in Odessa, Texas where he provides single coverage in the emergency department as well as in-hospital codes.

Teaching healthcare professionals is Dr. Bose’s true passion. Dr. Bose, who himself earned the highest score in the nation on the ABEM Annual In-Training Examination in 2002, has developed a national reputation in the area of medical board examination review in the field of Emergency Medicine. As a resident at Darnall Army Medical Center in 2000, he founded a multifaceted curriculum for resident mastery of core concepts in Emergency Medicine. This curriculum still exists today and has led Darnall Army Medical Center to achieve the number one score in the nation among over 140 civilian and military residency programs on the ABEM Annual In-Training Examination for seven years in a row (2000-2006). From 2005 to 2009, Dr. Bose served as an Attending Emergency Physician and Teaching Faculty Member at Advocate Christ Medical Center in Oak Lawn, Illinois, a high-acuity, high-volume emergency department with a renowned residency training program. Advocate Christ Medical Center now serves as the busiest emergency department and trauma center in Illinois. Under Dr. Bose’s direct mentorship, the Advocate Christ Emergency Medicine Residency Program earned the number one score on the ABEM Annual In-Training Examination in 2007, 2008 and 2009 (the position previously held by Darnall Army Medical Center). In 2009, Dr. Bose moved to Texas and was appointed Medical Director of Ector County, Texas and Medical Director of the City of Odessa, Texas, and in this role has been directly responsible for the training of hundreds of pre-hospital personnel. He also serves as a clinical professor at Texas Tech University Health Sciences Center, as an adjunct professor at University of Illinois and has held faculty positions at University of Texas and Texas A&M.

Dr. Bose, a former Major in the U.S. Army, served one of the longest combat deployments by a physician since World War II. During Operation Iraqi Freedom, Dr. Bose cared for thousands of wounded soldiers and Iraqi civilians. He provided front line emergency care during the peak of insurgencies in Baghdad and Najaf, and was the US physician selected to treat Saddam Hussein shortly after his capture from the spider hole. In addition, Dr. Bose was one of the only front line physicians in the Second Battle of Fallujah during the U.S. seizure of the city. When not on missions, Dr. Bose volunteered his free time by serving at the busiest trauma center in the world at that time, the Ibn Sina Hospital, Baghdad. His 15-month tour in Iraq and leadership role with the battalion that fought in two of the largest and most hotly contested fights by the U.S. Army since Vietnam earned him Presidential recognition and several awards including the Bronze Star, The Combat Medical Badge, The Army Commendation Medal and was featured as a “CNN Hero.”

He uses his military, medical, and teaching experience to be an active proponent of veteran and healthcare issues in the national and international arenas. He educates the public through worldwide media appearances, and lectures to audiences numbering in the thousands (more details are available on www.TheBattleContinues.org). Dr. Bose has appeared on CNN, MSNBC, CBS News and local news affiliates. In addition, he served as a medical correspondent for a weekly CBS segment discussing medical and personal health issues. He serves as Chief Medical Officer and Co-Founder of liveClinic, a portal that helps physicians sustain their outpatient practice.

A passion for education and the pursuit of better patient outcomes has led Dr. Bose to develop this review course tailored to emergency medicine physicians. His prior experiences help provide a unique perspective to a course that is sure to help Emergency Medicine physicians pass their MyEMCert assessment with flying colors.

COL John McManus, M.D. has built one of the strongest reputations in pre-hospital, emergency, and disaster medicine both academically and within Emergency Medicine organizations. He has authored over 100 scientific publications, lectured as a keynote speaker at numerous conferences and events, and served as Chapter President for the American College of Emergency Physicians (ACEP). Further, he is an active board member for various organizations and has been extensively involved in national health care policy reform. Over the course of his distinguished career, he has earned many national accolades including the ACEP National Faculty Teaching Award in 2005 and recognition as the Outstanding Army Medical Department Lieutenant Colonel of the Year by the U.S. Army Surgeon General in 2006. He was awarded the Legion of Merit from the U.S. Army in July of 2012. Currently, Dr. McManus is a physician executive providing clinical leadership and medical management expertise to the Department of Defense and civilian medical community.

After graduating from North Georgia Senior Military College with a full National Guard Scholarship, Dr. McManus attended the Medical College of Georgia where he served as student government president. After medical school, he served in the U.S. Army for 24 years as an active duty officer on numerous assignments and deployments around the world, including Bosnia, Kuwait, and Iraq. Dr. McManus completed his Emergency Medicine Residency Program at Madigan Army Medical Center and University of Washington. During this time he also served as a Teaching Faculty Member at several U.S. Army teaching hospitals. Dr. McManus later completed his EMS fellowship and earned his Masters Degree in Clinical Research at Oregon Health and Sciences University, and earned his MBA from Brenau University. He also worked as an Emergency Medicine physician at two Level I trauma teaching hospitals in San Antonio, Texas.

Dr. McManus recently retired from the U.S. Army in July of 2012 as a decorated combat veteran with a combined federal service record of over 24 years as a Medical Corps Officer. During his second tour to Iraq, he had the honor to serve as the Chief Medical Officer of the last Combat Support Hospital (47th CSH) in Baghdad, closing down the eight and half year conflict.

Like Dr. Bose, teaching health care professionals is Dr. McManus’ passion. He has served as the Program Director and Research Director for various academic Emergency Medicine departments over the course of his career. He had the opportunity to serve as the Director for the U.S. Army’s EMS Department and the Director for the Center of Pre-deployment Medicine at the U.S. Army Medical Department Center and School at Fort Sam in Houston, Texas where he coordinated the training of all medical personnel going to Iraq and Afghanistan. In 2007 he founded the U.S. Army’s first Emergency Medicine subspecialty fellowship in EMS at the San Antonio Military Medical Center and served as its Program Director from 2007 to 2011. In 2010 he founded the University of Texas Health Science Center in San Antonio’s first Emergency Medicine subspecialty fellowship in EMS and served as its Program Director from 2010 to 2011. Dr. McManus has edited five medical textbooks and has been responsible for the training of Emergency Medicine residents for the past 15 years. Under his direct mentorship, these residency programs have scored in the top of their respective classes on the A.B.E.M. Annual In-Training Examination.

Dr. McManus also has an extensive medical and scientific research background. Shortly after the onset of war in Afghanistan and Iraq, he was selected to serve as part of a key group of U.S. Army personnel performing cutting edge combat casualty care research at the U.S. Army Institute of Surgical Research. The lessons learned were critical in the improvement of medical care on the battlefield and pre-hospital disaster care. Further, as mentioned, he has authored over 100 scientific publications over the course of his medical career.

Dr. McManus uses his military, physician and academic experience to help improve health care by educating the public through speaking engagements and media appearances. He is an internationally recognized speaker with over 500 presentations worldwide. He has also participated in numerous televised interviews and served as a military medical correspondent for the Armed Forces Network (both radio and television).

Thank you for considering our reviews.
Have questions?

We look forward to serving you!

InTraining Exam
(All Years During Residency)